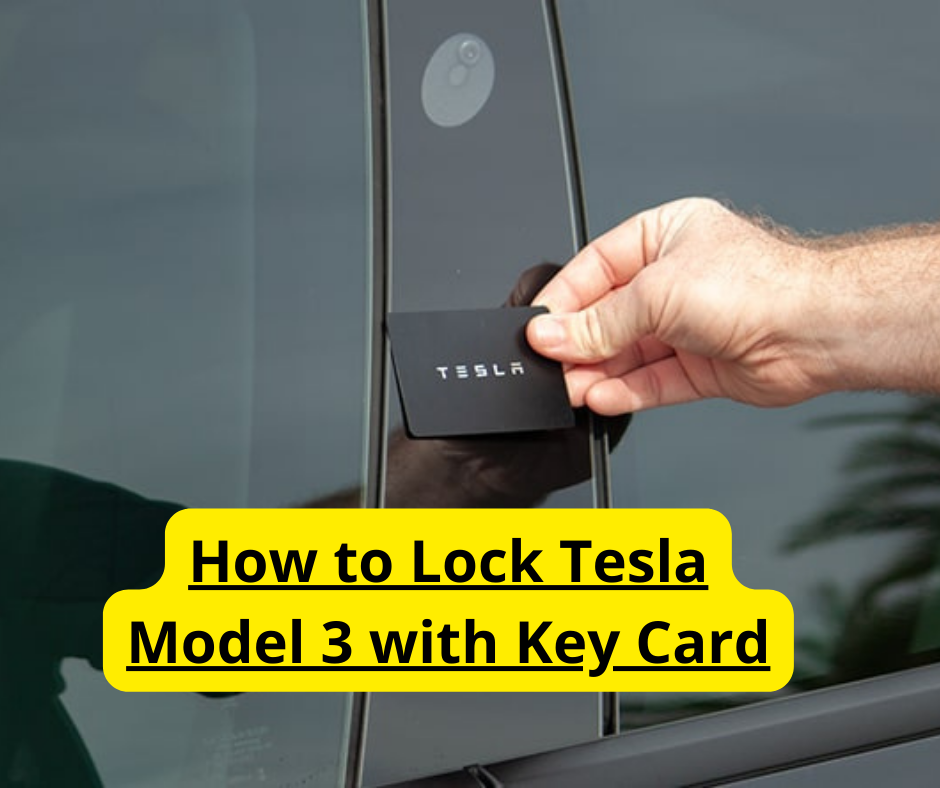 The Tesla Model 3 is a compact executive sedan that is battery powered which means it has no combustion engine. With a near-ideal blend of performance, driving range, and accessibility,  the Tesla Model 3 is an electric vehicle that lives up to the hype and standard.

Tesla cars are known to use key cards as a means to lock are and unlock and even start the car sometimes. However, there are other means to unlock the car such as using a Tesla key fob and even the key. If you have a key cardboard but don’t know how to use it to lock your Tesla model 3, you are in the right place.

How to Lock Tesla Model 3 with Key Card

Tesla comes with two Model 3 key cards, produced to fit in your wallet without causing any inconvenience. The key card communicates with Model 3 using short-range radio-frequency identification signals. The key card can only be used close to the car

To lock a Tesla Model 3 with a key card, place the card on the pillar on the driver’s side below the Autopilot camera. When the car detects the key card, the exterior lights flash, the mirrors fold, the horn sounds, and the doors lock.

How to Lock Tesla Model 3 from Outside

As I mentioned before, tesla has many security options to lock and unlock the of the most fascinating ones is the use of the smart ring. The Tesla smart ring is a very slick way to lock the Model 3 Tesla from the outside.

To lock a Model 3 Tesla from the outside with the smart ring, place the ring on top of the sensor that is below the camera on the driver’s side for a few seconds until you hear a sound that indicates the car has been locked. Note, simply placing the ring or the finger with the ring on the sensor will do it, you do not have to hit your hands or the finger on it to make it work.

When the doors lock, the exterior lights flash once and the mirrors fold (if Fold Mirrors is on). To also hear a confirmation sound whenever Model 3 locks, touch Controls > Locks > Lock Confirmation Sound > ON. The Tesla Model 3 automatically locks immediately if those things occur.

Walk-Away Door Lock operates only when using an authenticated phone or paired key fob. When you walk away from Model 3 carrying a key card or unpaired key fob accessory, Model 3 does not automatically unlock/lock, even if this feature is turned on.

How to Put Tesla Model 3 in Neutral

How to Add Phone Key to Tesla Model Y

How to Transfer Tesla Ownership

How to Unlock Tesla Model 3

To unlock Tesla Model 3 while sitting inside,  you can lock and unlock all doors by touching the lock icon on the touchscreen. Model 3 doors are electrically powered. To open a door while sitting inside, press the button located at the top of the interior door handle and push the door open.

The doors can also be unlocked by pressing the Park button on the end of the drive stalk a second time. Pressing this button once engages Park and pressing it again unlocks the doors. Enabling Controls > Locks > Driver Door Unlock Mode only unlocks the driver door when you first unlock Model 3.

Why Do You Tap a Tesla Before Charging? 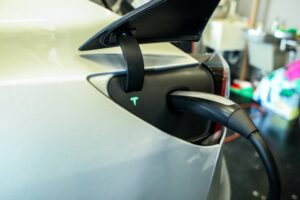 It also helps line up the electrons so that they can feed into the car in the most efficient and effective manner possible. Without tapping a tap car before charging the electrons tend to bunch up at the charge port which causes a longer recharge session.

How Do I Know if My Tesla is Locked?

When you walk away and are about 30 feet away you should be able to hear an audible tone and observe the side mirrors fold inward and the exterior lights flash. This is audible and visual signs confirm that the car is locked.

To also hear a confirmation sound when Model Y locks, touch Controls > Locks > Lock Confirmation Sound. After activating the functions the horn sounds, the exterior light flash once and the mirrors fold inward.

Why is My Tesla Key Card Not Working?

The Tesla key card may not be recognized while inside a wallet, due to interference or obstruction from other contactless cards and other materials inside the wallet. So in other to enable the Tesla Key Card to work effectively you have to remove it from your wallet first.

Tesla Key Card may not work if not placed close to the card reader located below the Autopilot camera. At times you may need to physically touch the center console or driver’s side door pillar with the Tesla key card, and you may need to hold it against the transmitter for one or two seconds.

Can Tesla Remotely Disable Your Car?

Yes, Tesla has the ability to disable a car remotely.  First of all, the company has stated they can shut off a car remotely, but it is a one-way switch, so the car needs to be reactivated at a Tesla facility, at least (maybe requiring potentially expensive work done, too).

Tesla has started blocking users who abuse the seat controls if they touch too much. That is, if we dedicate ourselves to moving the seat without stopping, the car’s own operating system warns us that we must stop doing that.

Tesla Model 3 doors and trunks can automatically lock whenever you walk away carrying your authenticated phone or paired key fob. In other to activate this feature or function on or off, touch Controls >Locks > Walk-Away Door Lock, and immediately the function is activated or deactivated.

From the above write-ups, we have seen how to unlock Tesla Model 3 with a Key card. This works by pacing the smart card on the driver’s side sensor for a few seconds until you hear a sound that indicates the car is locked reverse the process to unlock the car.

We have also discussed why Tesla cars are tapped before charging in other to open the charging port and also help in pushing line up electrons so that they feed in the car in the most efficient manner.  Why the key card is not working in the sense whereby the cards are kept inside a wallet or purse.