Symptoms of a Bad PCM includes misfiring engine and all that will make either the ECM, TCM or BCM to malfunction. Power control module is one of the most important electronic components in modern cars.

It is generally a combined controller consisting of the engine control unit (ECU) and the transmission control unit (TCU).The PCM commonly controls more than 100 factors in a car or truck.

Because of the immense importance of the PCM, when its faulty, your car might not even start until fixed. Early detection of the signs and symptoms of a bad power control module can be a bonus to you and will improve your engines lifespan since you can tell when something is wrong yourself. 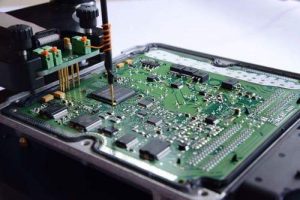 Remember, the PCM is responsible for controlling the affairs of the TCM, ECM and even the BCM. When any of these smaller unites are faulty, they report to the master power control module then the PCM will read the error code sent.

What Would Cause my ECM to go Bad 3 Important Facts

How to Reset Maintenance Light on Toyota Corolla

After reading the error code, the PCM will either not allow the engine to start if the fault is much or light up the check engine warning light. Enough of the talking lets see the common early signs of a bad power control module. Check Out How To Test a PCM on a Ford In 3 Simple Steps here on Cookip in one of my previous article.

A lot of time i have seen people get a lot worried over the check engine light, yes it good to give attention but not too over exaggerate it. Last week my neighbor wont even drive her Toyota to an auto repair shop because check engine light was on.

Who does that, it was funny when she called me to help her check before going to the mechanic. I later ran some few checks and found out that her car was missing emission and that’s why the check light came up.

In this case scanning the computer using and OBD-II is enough to get the trouble code get it fixed. If you notice the check engine light come on while driving just park and have look through the vehicle if you see nothing serious continue driving but make sure you stop in the next auto repair shop.

A misfiring engine can simple be a sign of bad spark plugs, it could even be sign telling you that you engine is missing emission. While a misfiring or stalling engine problem could be as simple as it can be, it an also be a very big problem.

Always give attention to any warning signs and symptoms your car’s computer is giving you. A stalling or misfiring engine could be another symptom of a bad PCM.

A faulty computer may cause the vehicle to intermittently have issues such as stalling or misfires. The symptoms may come and go, and may not appear to have any sort of pattern to their frequency or severity.

Limp mode reduces the engine power, in turn the performance is also affected. If the PCM has any issues, it may throw off the timing and fuel settings of the engine, which can negatively affect performance.

A faulty ECU may cause the vehicle to experience a reduction in fuel efficiency, power, acceleration. The use of OBD-II to read trouble codes can be very useful here.

Generally, difficulty is in starting the car can be attributed to bad PCM signs and symptoms. This can be caused by several different PCM errors, but may also be an indication of something wrong in your ECM.

However, other factors like short circuit, wrongly installed timing chain, failing spark plugs can be as cause of difficulty in starting vehicle. All these problems can be read by the Power control module through the help sensors thereby causing the car not to start.

Similarly, if the ECU fails completely, it will leave the vehicle without engine management control, and will not start or run as a result. The engine may still crank, but it will not be able to start without the vital inputs from the computer.

Regardless, this is a serious problem, since your car could potentially fail to start when you’re stranded on a country road, in an empty parking lot, or any number of undesirable locations.

What does the PCM control?

The PCM (Powertrain Control Module) is the main computer in the automobile that controls all its functions. By placing control of both the transmission and engine into one unit, the PCM can better coordinate their functions for better power delivery and fuel economy.

What would cause my ECM to go bad?

Despite all the protective covers, corrosion and moisture is a big challenge to some electronic components. The engine control module happen to fall victim of getting damaged by moisture and corrosion too.

Moisture and corrosion finds its way through to the ECM via the connector wires. This happens over a period of time (5 to 10 years) due to the ECMs exposure to the elements.

What is an OBD II trouble code?

They are used by automakers to communicate the cause of a problem to service technicians and by technicians to diagnose and fix problems. There are a few different categories of OBD II trouble codes, and the one we will be discussing is related to air flow.

OBD II trouble code P0171 is most commonly caused by a faulty air flow sensor. A faulty sensor can cause what is known as a ‘stale air’ condition, which can affect fuel efficiency and vehicle performance.

Will a bad PCM drain battery?

If the relay shorts it can leave power on to the computer, even when the vehicle is turned off. This will place a parasitic drain on the battery, which will eventually cause it to go dead.

This are article talks about symptoms of a bad powertrain control module (PCM). If you any more question please ask us using the comments section.

A bad PCM can be a sign of a larger problem with your car. It is important to look for the symptoms and also to make sure that you are getting regular oil changes and maintenance checks.

Oil leaked onto your engine or oil pan – this is a sign that your PCM needs to be cleaned. If the leak happens at cold temperatures, it might be an indicator of faulty gaskets or seals which need repair. If it happens at warm temperatures, it might be an indicator of a cracked crankcase or malfunctioning PCV valve which should also be repaired as soon as possible.

It’s important to keep up with regular auto maintenance so that any potential problems can be caught before they turn into bigger issues.